We’re all familiar with the wide range of photography products that Canon, Sony, Nikon, and other photography companies offer. Mirrorless cameras are some of the lesser known cameras that these companies carry and among the photography world in general.

What is a mirrorless camera?

At first glance, mirrorless cameras don’t look all too different from DSLRs. The term “mirrorless” comes from the fact that they don’t have an optical mirror that SLR cameras do. The mirror that an SLR camera uses allows the user direct sight through the lens.

The talk of the market usually concerns DSLR cameras, but mirrorless cameras still put large numbers in terms of sales. Sony, in particular, has experienced nearly a 23% growth in sales since January of 2017. This is mainly due in part to the rise in popularity of its a7R II and III cames (more on those below).

In this article, we’ll explore some of the most popular mirrorless cameras on the market. We’ll also discuss when and why you should consider one. 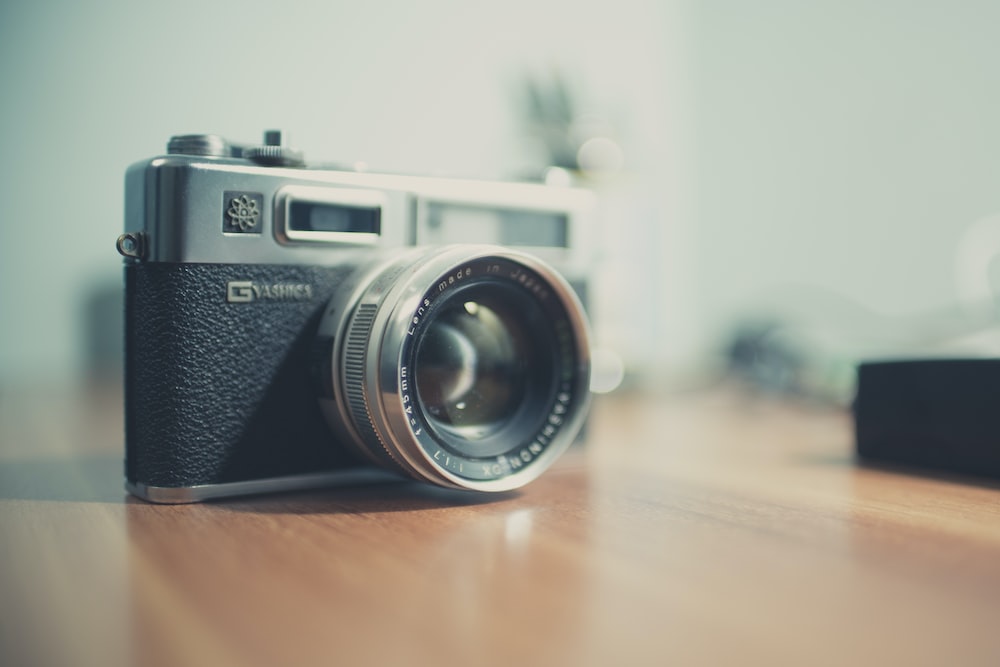 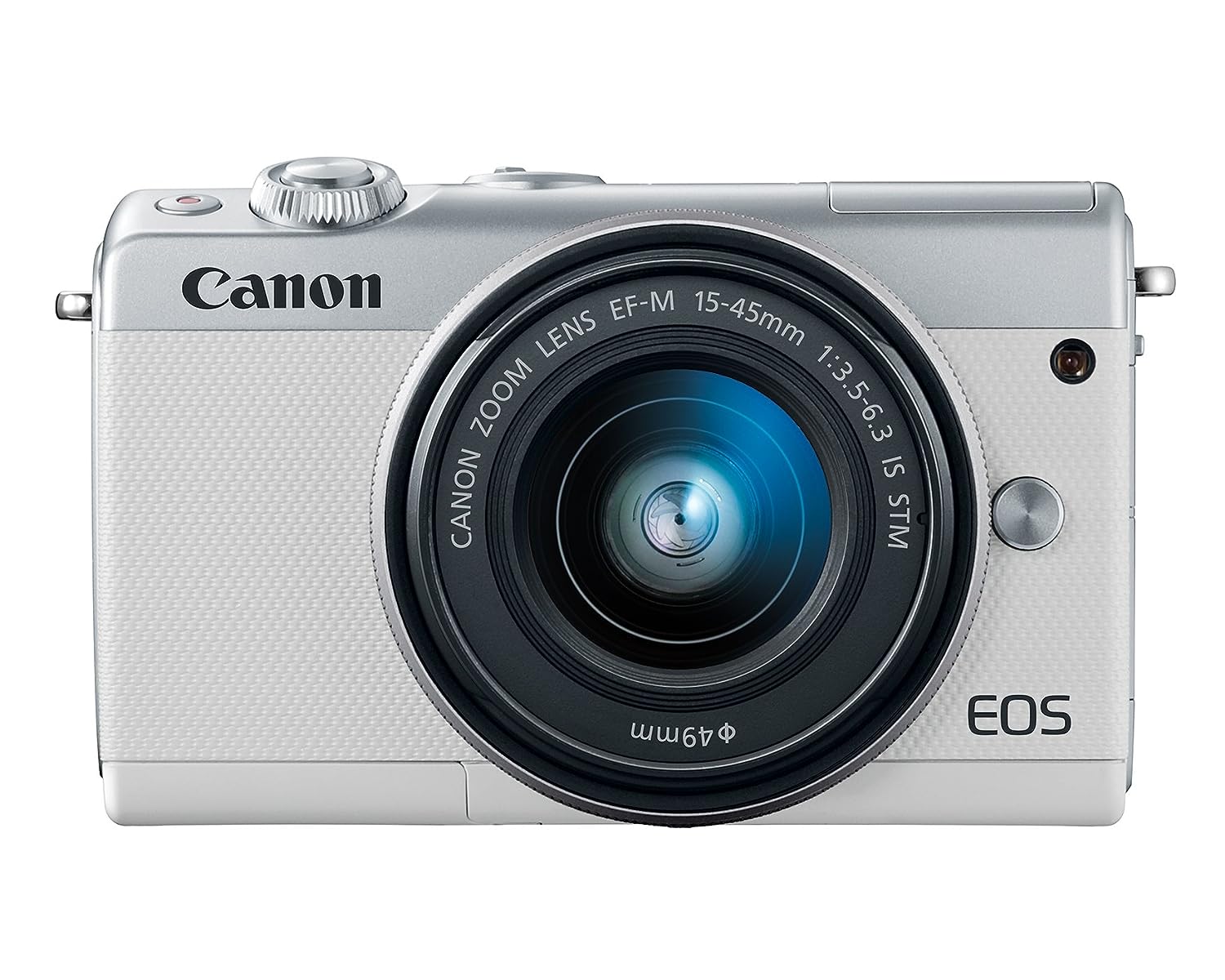 The EOS M100 is a low priced mirrorless camera compared to some of the others on this list. Despite this, it comes with some impressive specs:

Some people may be confused why a mirrorless camera has WiFi and Bluetooth. As cameras become simpler and more advanced, ones like the EOS M100 have the ability to connect to your phone, tablet, computer, or printer for a number of uses including remote shooting. It’s digital backscreen acts as a creative assistant-giving you editing capabilities and a continuous shooting if you want to capture a few moments in a short span of time. 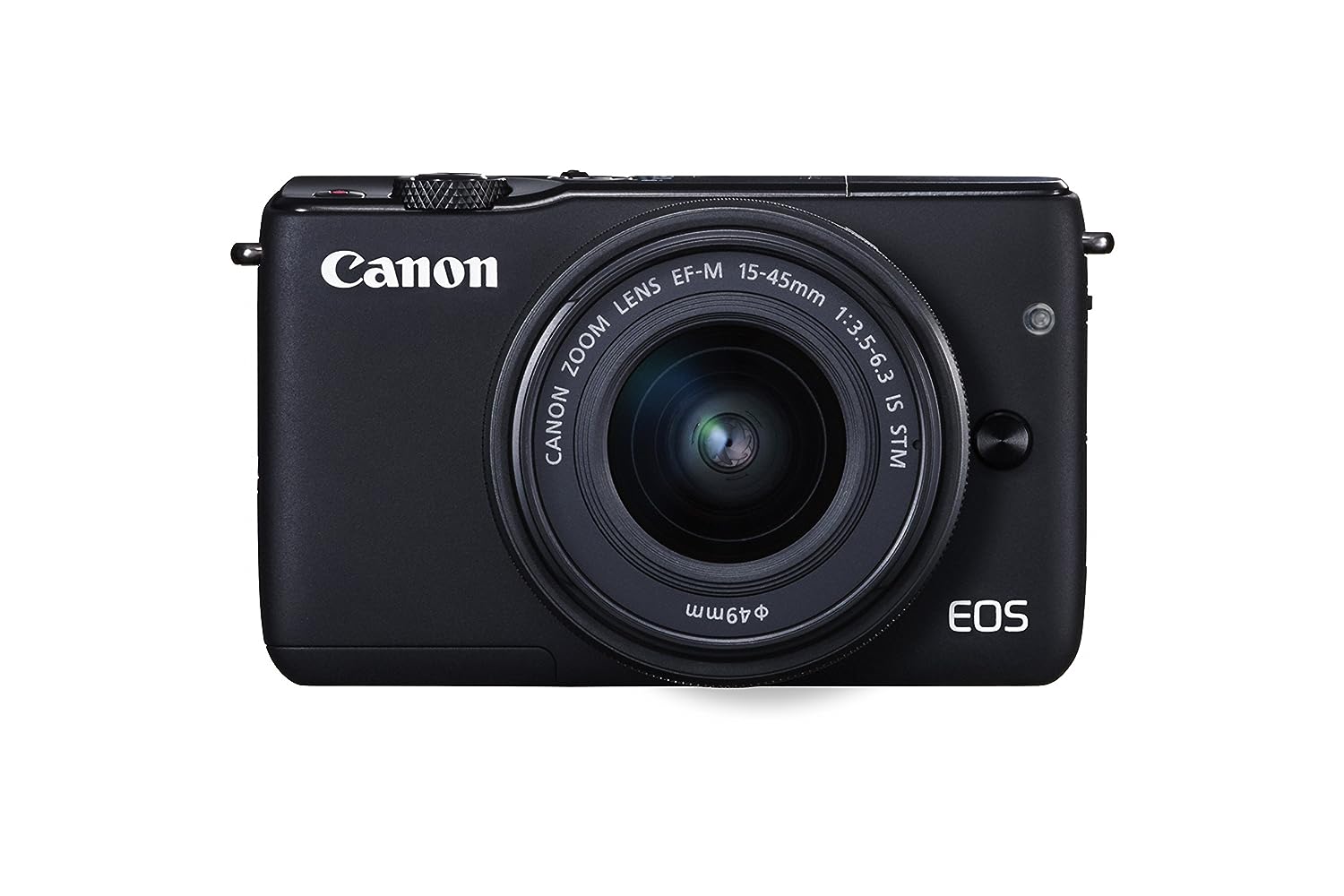 The EOS M10 doesn’t look too different from the M100 aesthetically and carries many of the same specs. It utilizes a DIGIC 6 Image Processor improves some of the M10’s features-speeding up facial recognition accuracy, enables different movie formats, and augments the image sensor to pick up details.

Not only does it have great photo quality, but the video taking quality is also one of its better perks. Sure, its not the 60p that the M100 works at but its the next best thing for the price. Both cameras have built-in flash along the top of the device. 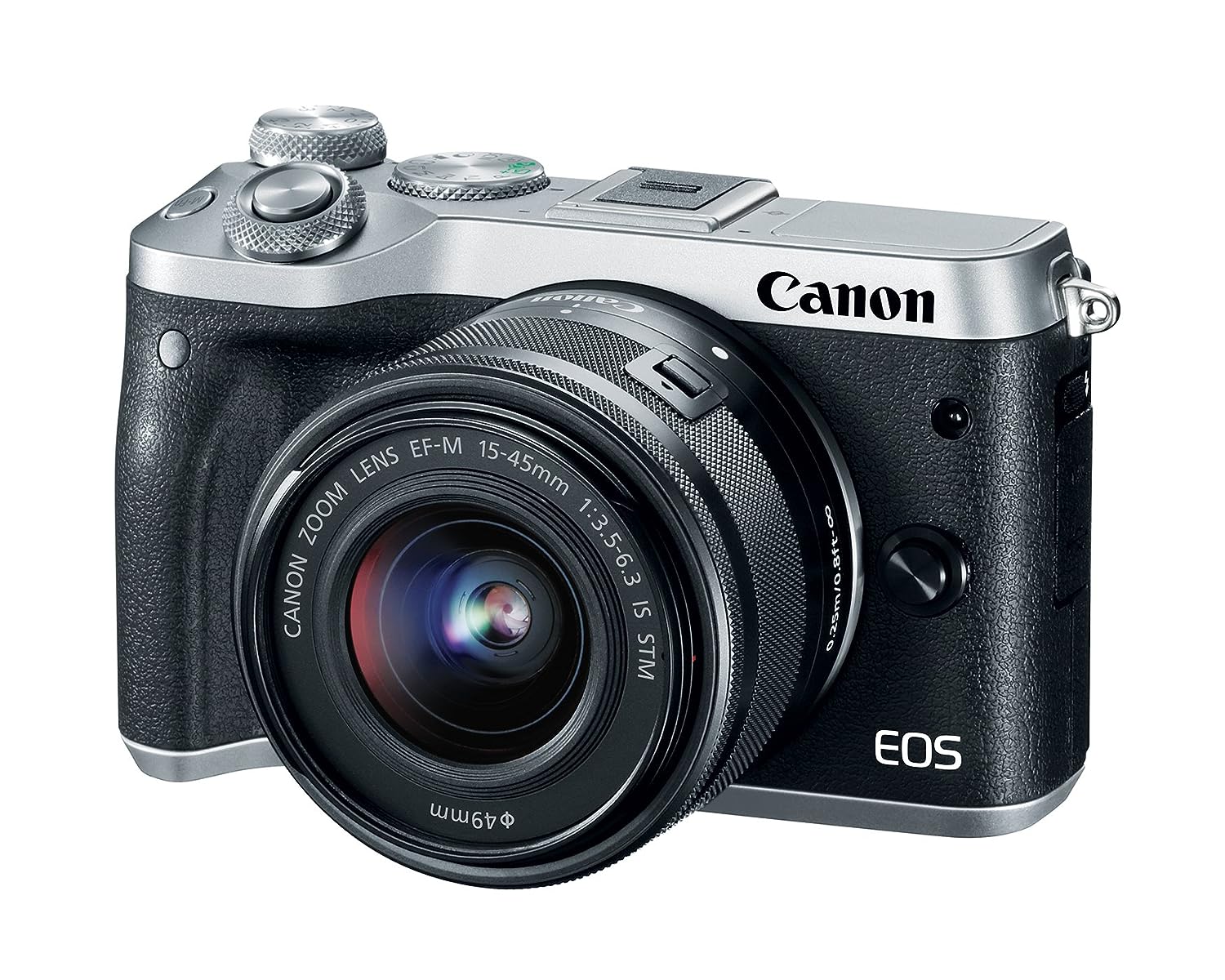 The EOS M6 takes a more classic look compared to the M10 and M100, looking more like the film SLR cameras. It still has a back screen, which makes it a cool blend between the old and the new, hip look.

One of the more interesting additions to this camera is something called Combination IS (Image Stabilization). Shaky hands are the #1 cause of blurry photos, and the EOS M6 employs the combination IS system along with 5-axis IS to keep the camera steady. As with most Canon mirrorless cameras, the lens are interchangeable, so feel free to purchase different lens if you feel you’ve outgrown the standard.

Purchasing newer lenses from the same manufacturer is preferable to 3rd-party kit lenses. You will have little problems with compatibility this way. They may be more expensive, but they’ll be worth the difference. 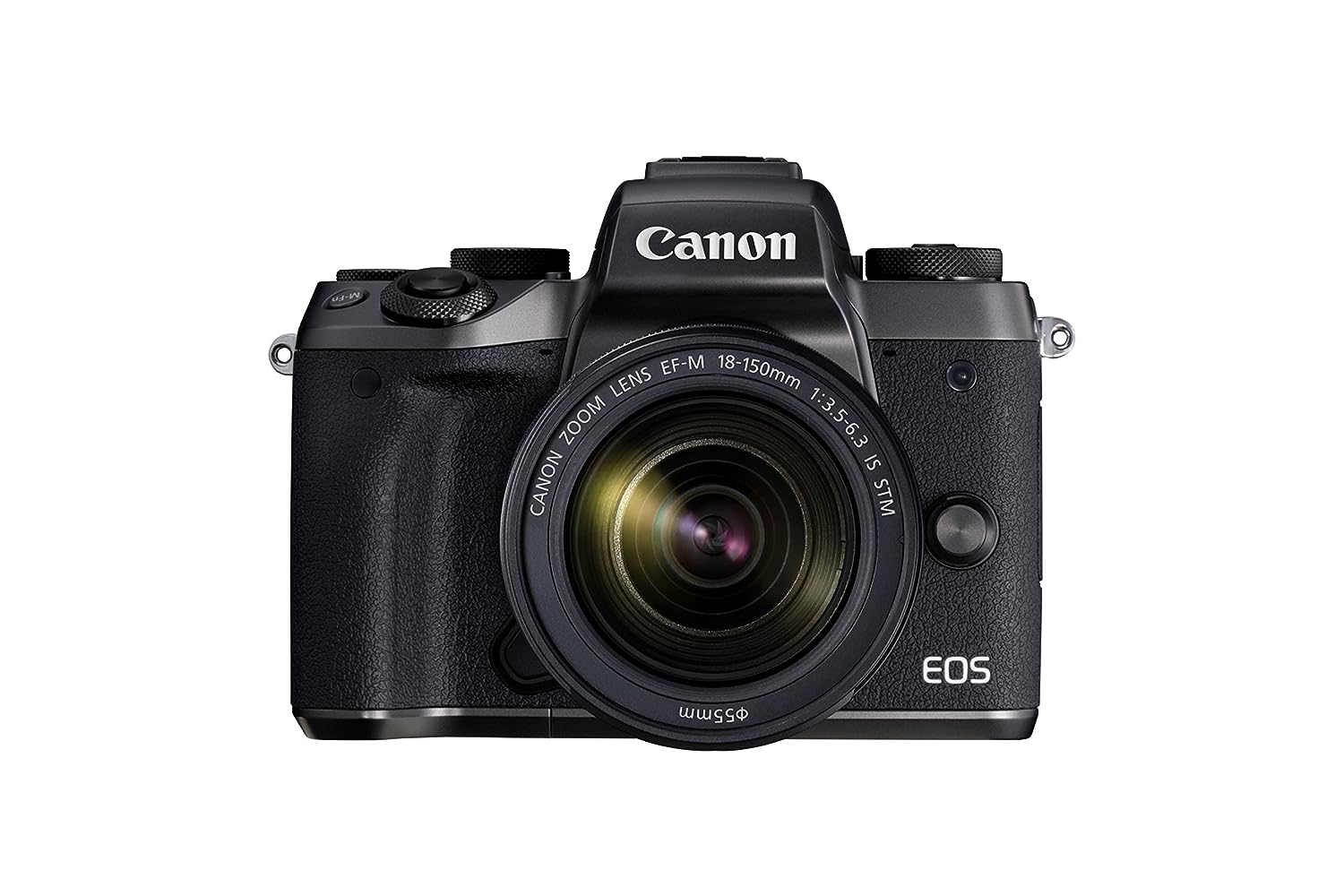 The EOS M5 is one of the more expensive mirrorless cameras on our list no matter the factory lens you put on it (15-45mm or 18-150mm). Regardless, it still retains some of the best specs on the market.

This camera utilizes an electronic viewfinder. This viewfinder is located within the overall viewfinder and further augments your sighting ability. Some people prefer to squint and point at what they’re shooting at instead of viewing it on a large back screen (also called live viewing). 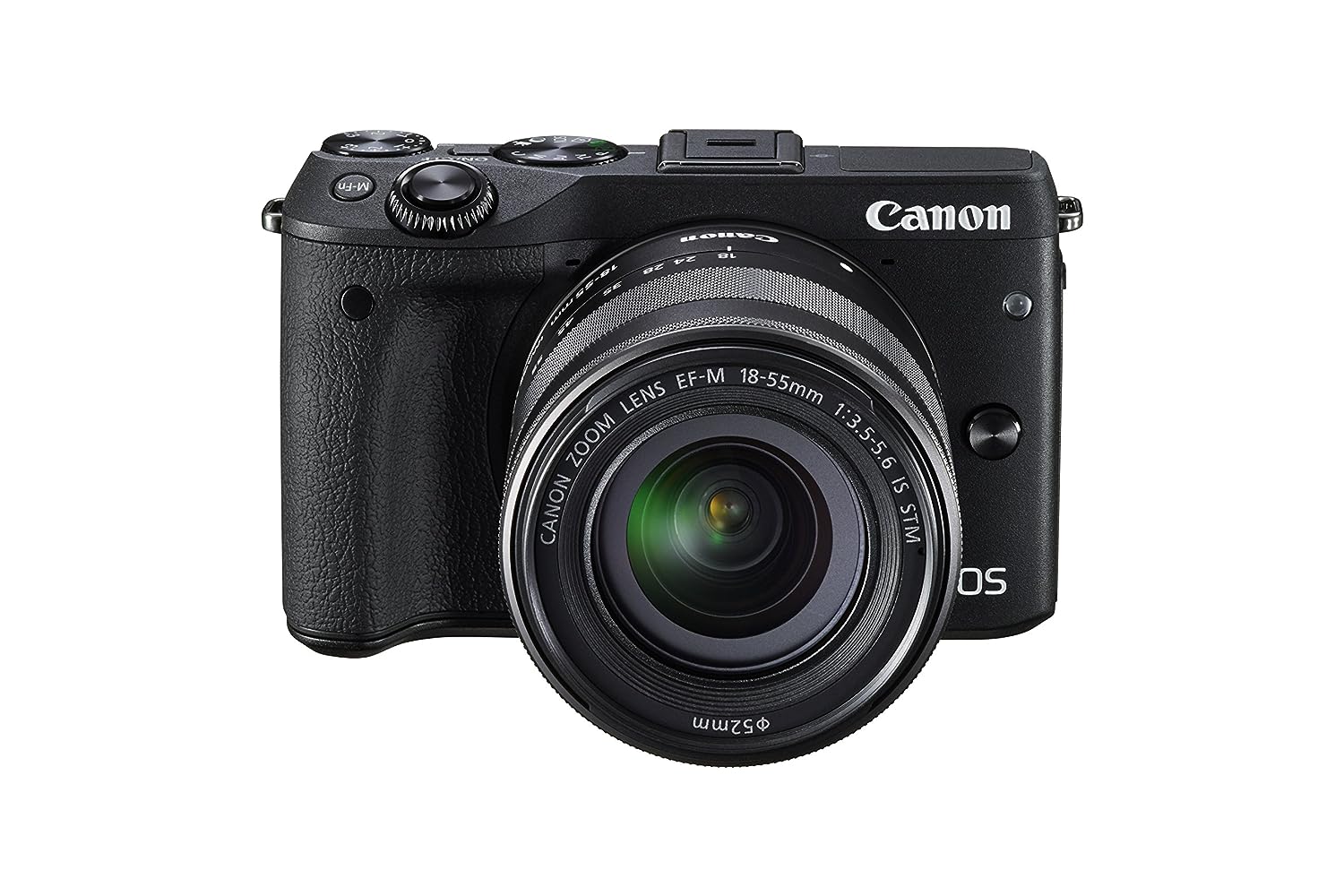 The EOS M3 is a fully immersive mirrorless camera because everything is fined tuned for user experience. Front Dial and Exposure Compensation Dial are easy to use and within reach of your thumb. The various other buttons and features are customizable to your liking.

It can be easy to get lost in all the terminology, but the EOS M3 is our pick for the best Canon mirrorless camera. Its movie shooting capabilities are above the rest of its Canon cousins with its Digic 6 processor. Increased movie quality comes as a result of Dual Pixel AutoFocus (DPAF)-which increases autofocus speed over the course of the area you are shooting. For more on DPAF, click here.

Even in low-light and less than ideal conditions, you’re sure to get unreal quality. 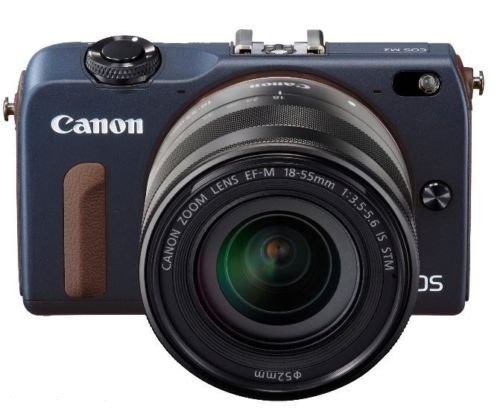 It doesn’t have as many buttons or dials as later models which makes it a lot more beginner friendly. Think of it as a big digital camera that you can hold in your hand but comes with the power of an even bigger mirrorless camera. It still has 1080p HD video recording capabilities and a 18MP APS-C sensor. 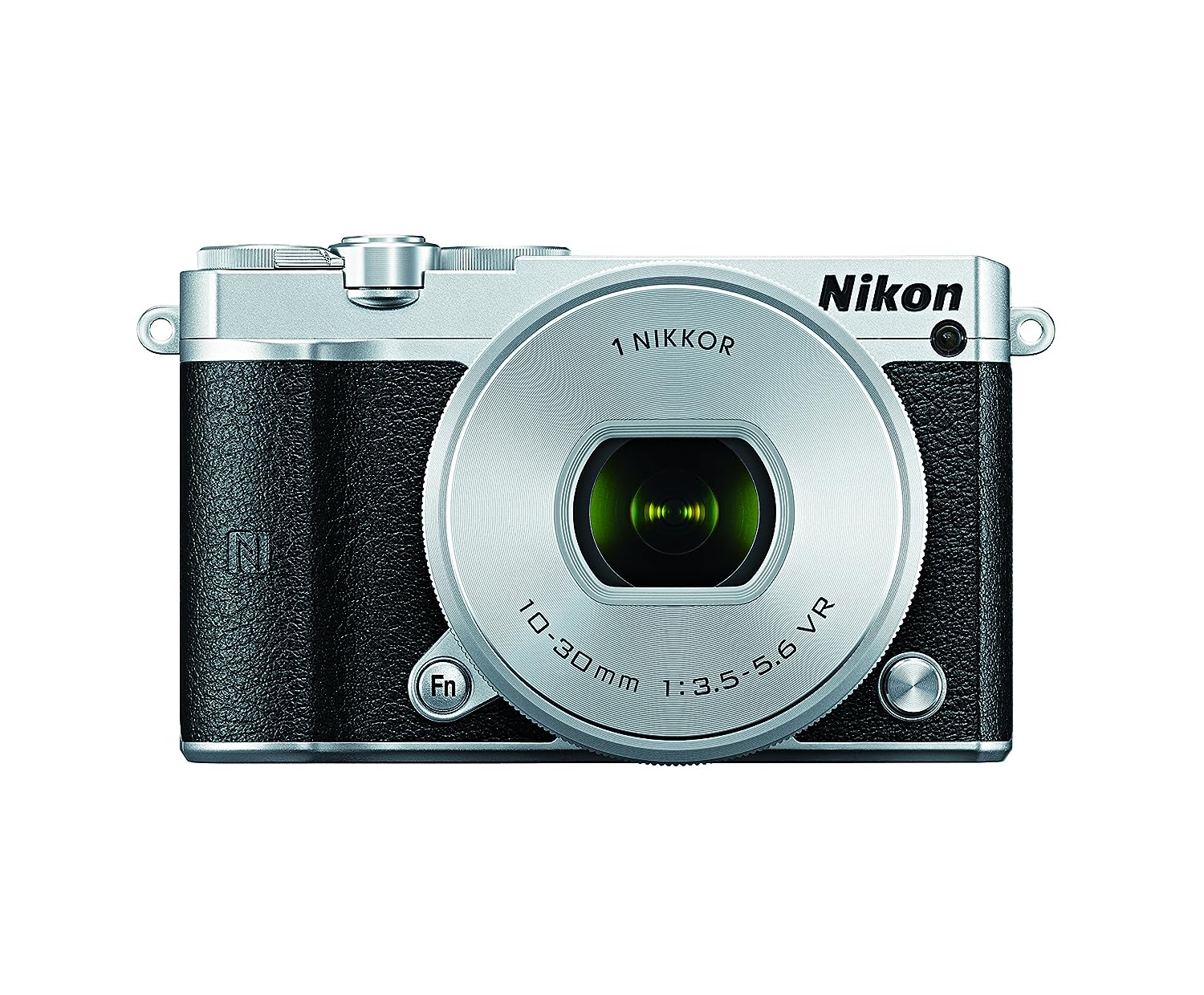 The J5 is Nikon’s premiere mirrorless camera and its price is still affordable.  It boasts some of the highest photo and video shooting specs on the market at 1080/60p. Even better, you can mount a variety of lens, but be sure you know that the camera and lens are compatible before you purchase the latter. At the bottom of this article is list of best Nikon lenses for mirrorless cameras. 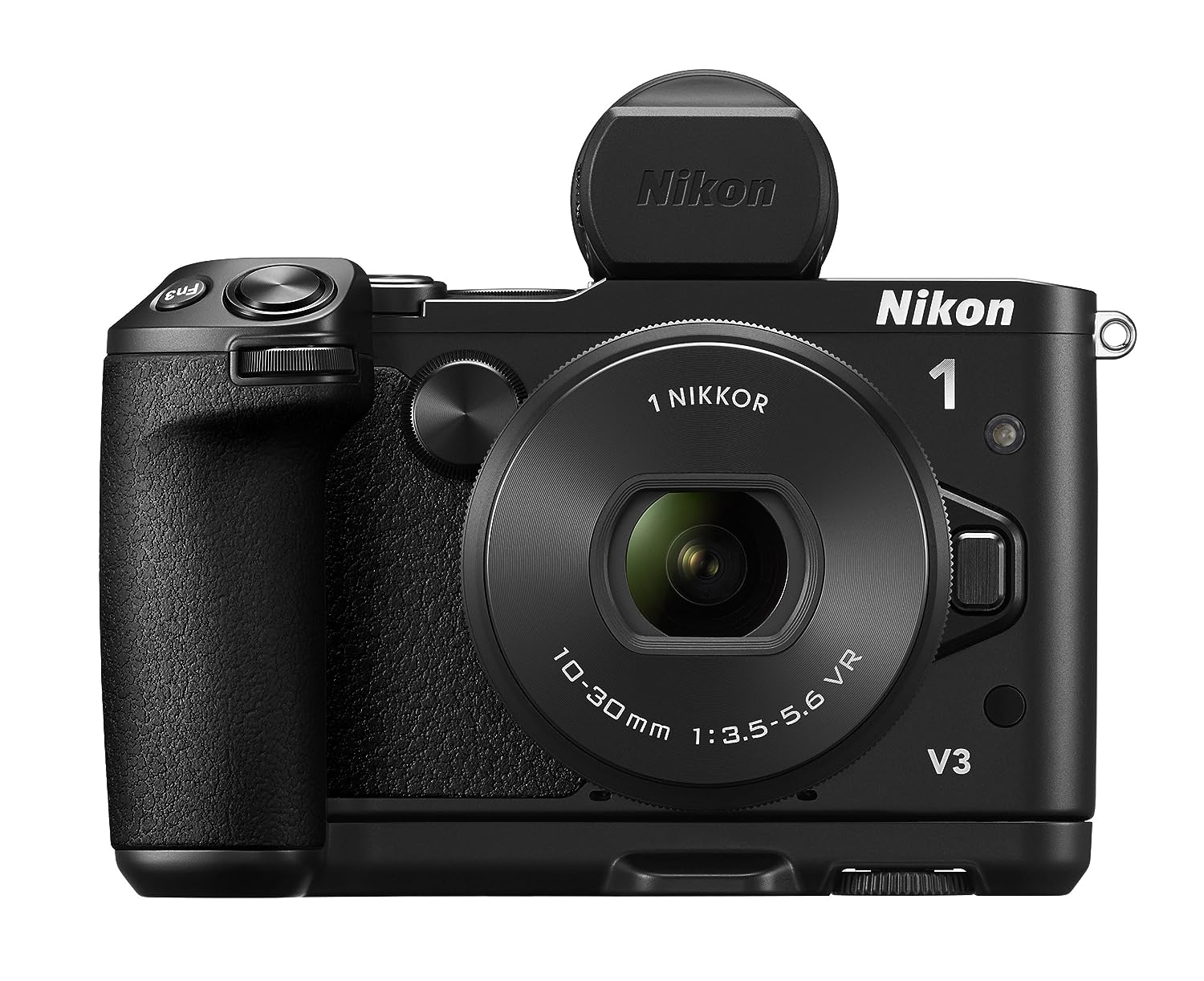 The V3 is a pricey camera but for good reason. It basically capitalizes on every perk that comes with a mirrorless camera (digital/electronic features) and still features an electronic viewfinder.

If you’re a camera fanatic, you can even strap DSLR lens to the V3. This device is as versatile as it is advanced. The price will be a large deterrent for most people, which explains why it’s probably designed more for the professional or ardent hobbyist. 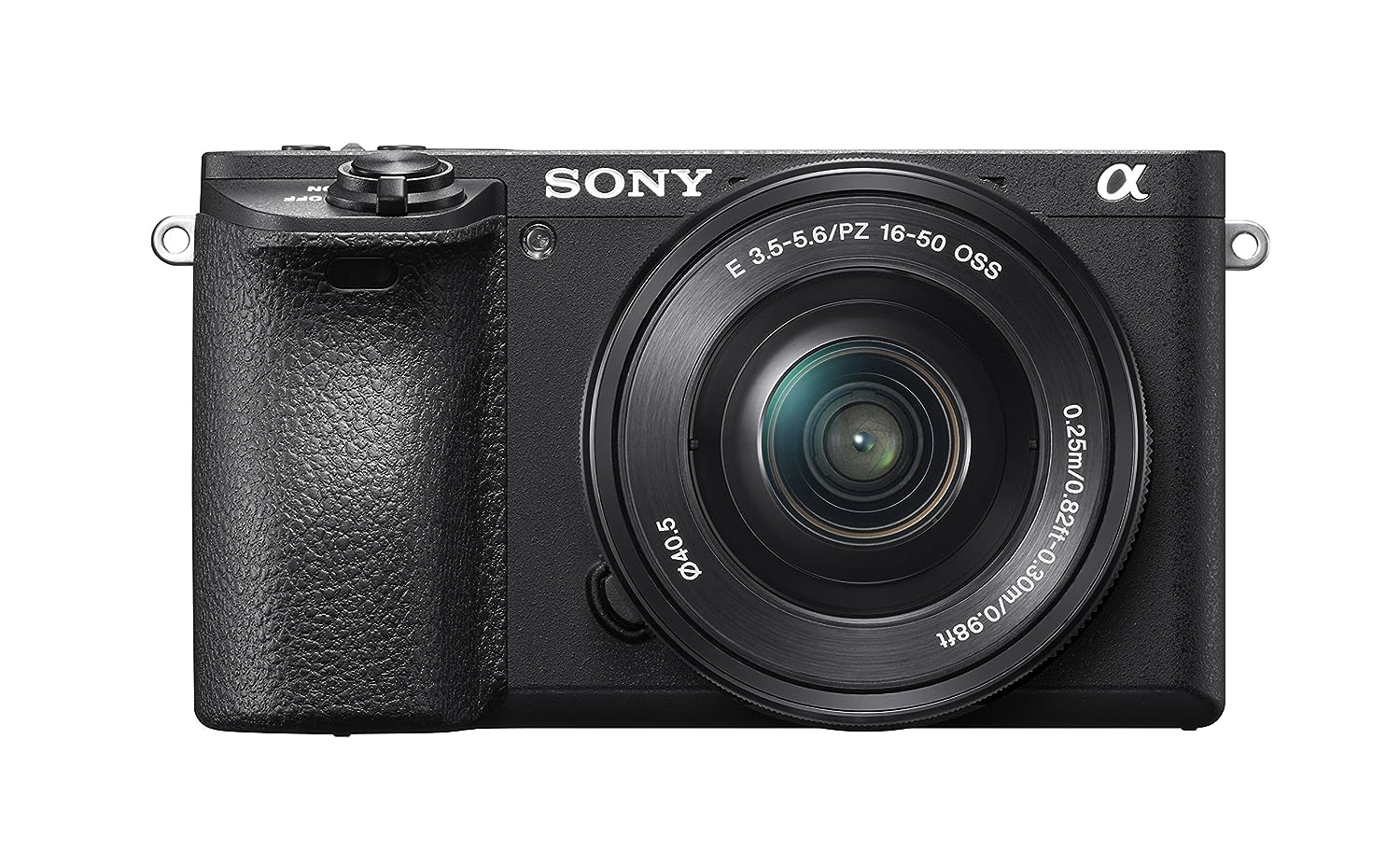 The Alpha a6500’s price range varies depending on which standard lens it comes with, but regardless it’s going to remain pretty high. So what are you getting out of it? Despite its price, the a6500 is one of the most popular mirrorless cameras on the market. This camera is constructed and fine-tuned for you to get unparalleled quality with each and every picture.

Having cools specs is good and all, but being versatile is even better. 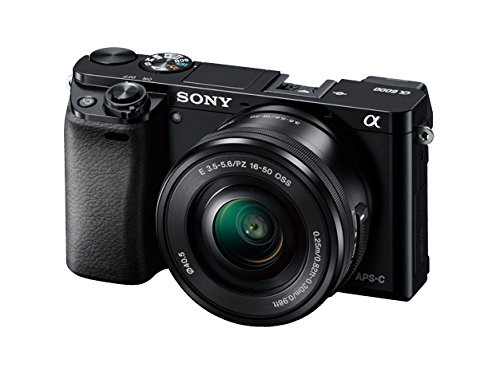 The a6000 is one of the most popular mirrorless cameras in Sony’s arsenal. Apart from being relatively cheap compared to the a6500, it as a lot of the same specs in terms of shooting film and video. You’ll still be able to get those high-quality shots with the BIONZ X image processor.

We previously saw how Canon equips their cameras with Bluetooth and WiFi capability. The same can be said for the a6000, as it also has the capability to instantly share the photos you take to the web or printer. The a6000 and the a6500 look very similar but have very different specs.

Many compare the a5100 to a standard DSLR camera. As the saying with this camera goes, “All the quality and half the size and weight”. In that case, you also can’t beat the price when comparing this camera and a top of the line DSLR. Even in low light conditions, the a5100 still flourishes and picks up on the smallest details.

For newcomers and beginners to mirrorless cameras, the a5100 is the ideal camera. The LCD backscreen flips up 180 degrees for your convenience and the flash meter pops up out of the main camera body. Part of what makes it a good beginner’s camera isn’t just that it has great specs, but that it’s also easy to use. 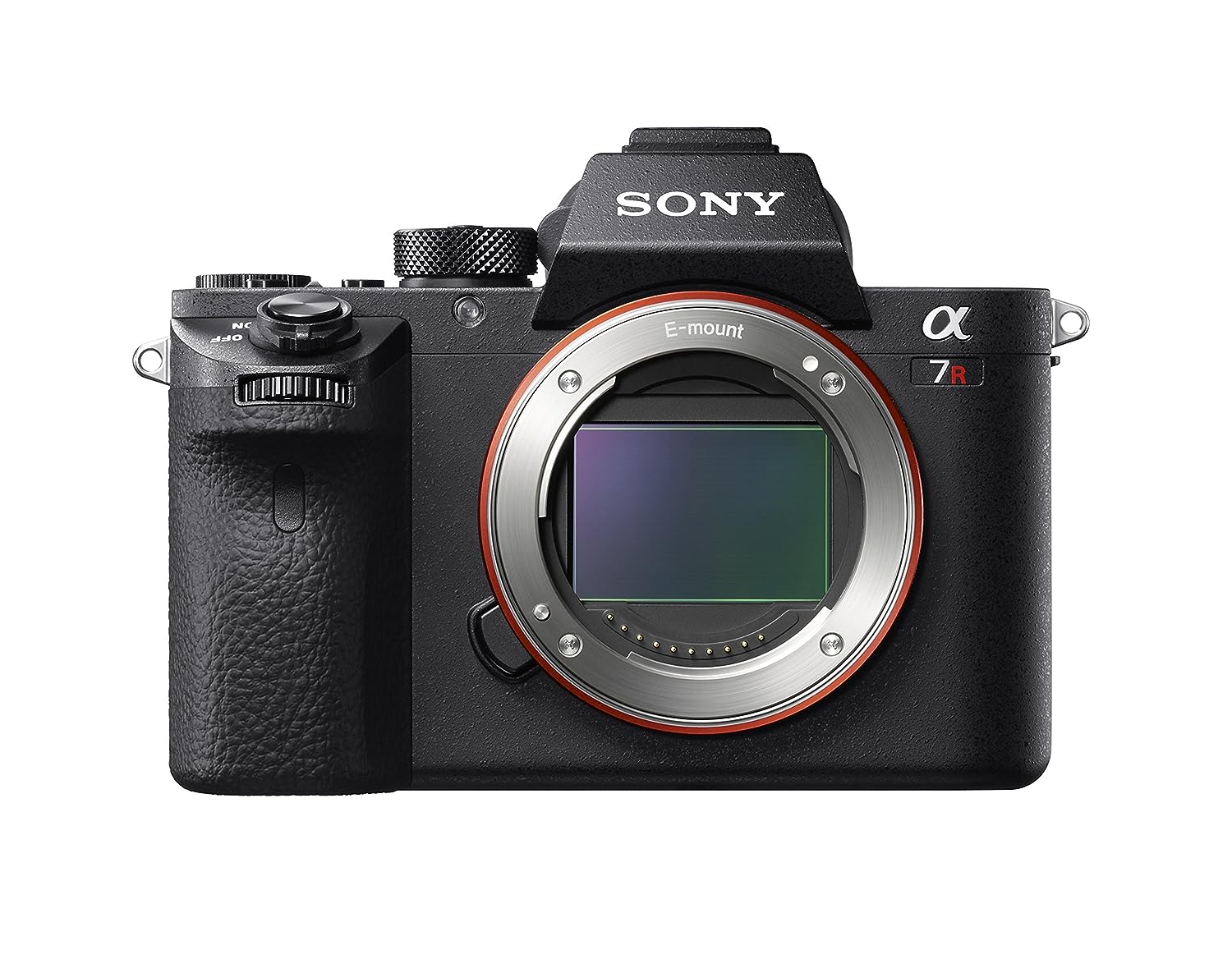 The a7R II takes the cake for the most expensive camera on our list, and that’s just the base price. A lens will cost you extra, which probably means this camera is for the dedicated professional. What’s so special about a camera that’s a couple grand a pop? The specs can be a little confusing, so we’ll explore some of the newer things to appear in this camera.

The a7R II is the first camera to feature the Exmor R CMOS sensor that sports 42.4MP. It is the only full frame sensor camera on our list.  This image quality will make your pictures seem larger and more intensive than life. This camera really does sport everything and more to capture the perfect image no matter what your subject is doing.

Another aspect to consider is the XGA OLED True-Finder. This is the viewfinder at the top of the camera, and is one of the best in the world at accounting for every detail in your shot. Depending on how far your lens allows you to zoom, capture everything from water droplets to large objects in the distance. Despite its ingenuity, it doesn’t look any different from any other electronic viewfinder.

Why Should You Get a Mirrorless Camera?

These cameras are still going to be pretty expensive no matter which one you buy. However, not only does it diversify the shooting experience, but the image quality will be just as great. Any of the cameras we’ve listed above will give you great image quality, as most are equipped with powerful processors and detail sensors.

There are a couple of mirrorless cameras that are good “beginners” cameras for those who are looking to move into more advanced cameras. The trick is doing research on these various specs to ensure you are getting the quality that you want for the right price.