The Drocon X708 is a pretty neat looking drone. It’s covered in a sleek black color and has some pretty sinister red eyes above the nose. You have the option of attaching air guards underneath the propellers for increased protection. The X708 checks off a lot of the boxes that make an ideal beginner’s drone. In this article, we’ll explain why. 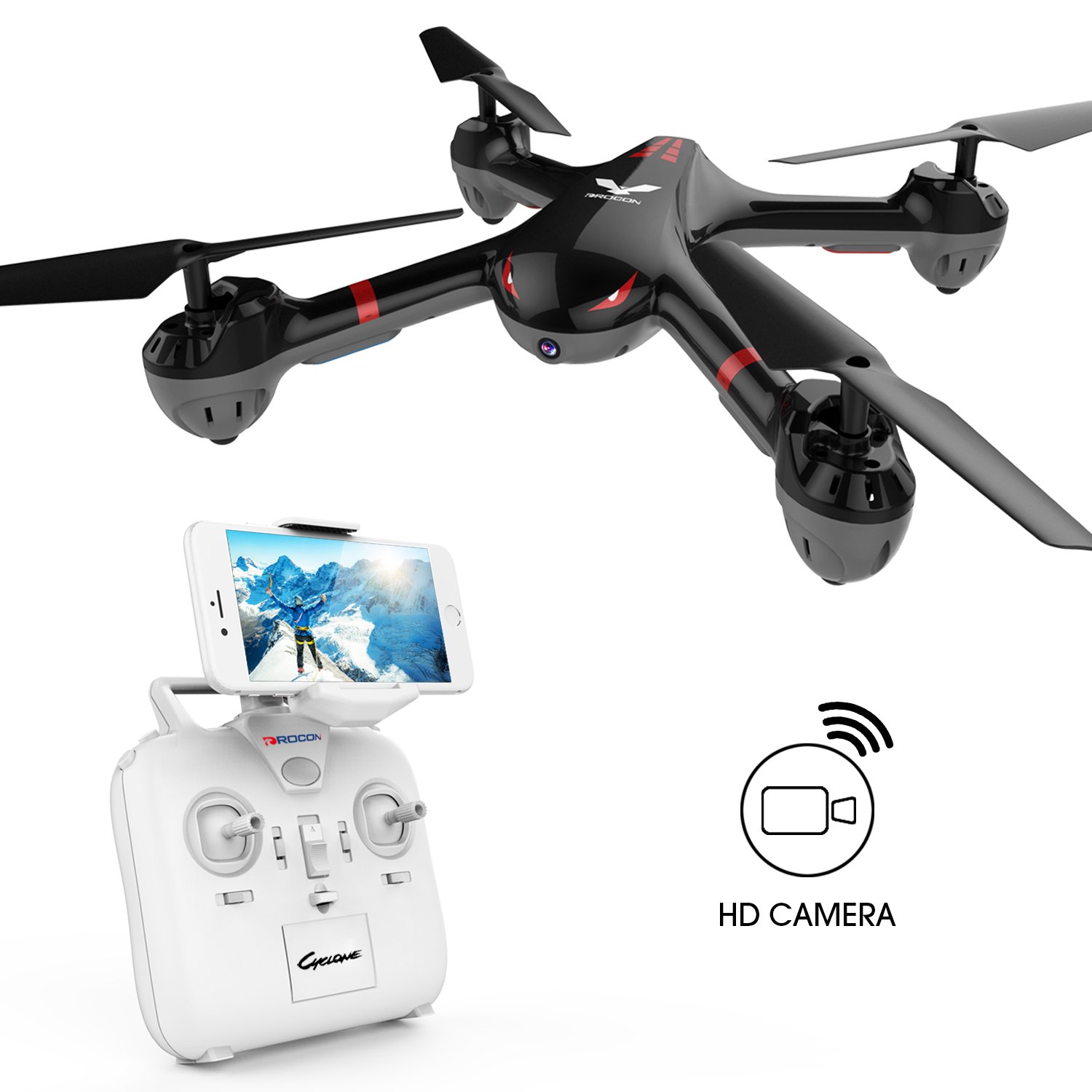 The camera on the X708W is a standard 720p device built into the nose of the drone. This design is pretty cool because you won’t have to worry about the drone falling on a camera that’s strapped to its underside. It may not be made of the strongest material, but you’re less likely to damage the camera if it’s built into the interior.

This camera broadcasts in real-time from its own Wi-Fi connection to your phone. Basically, you’re seeing through the eyes of the drone. It’s not uncommon to see a lot of drones using their underside cameras as their “FPV”. But the X708 truly gives the pilot an FPV experience through the nose camera.

Its common thought that cheap or beginners drones don’t have much to them besides a camera and flight capabilities. The X708W goes a little further by adding two notable features. The first is headless mode, which disengages the front facing orientation of the drone. This means that any part of the drone can act as the nose.

Headless mode is a good beginners tool that helps newer pilots get used to the controls without having to worry about keeping the primary nose’s direction.

The second feature is an automatic return button located on the shoulder of the controller. As the name suggests, the button returns the drone to you no matter the range. With this feature, you’ll want to stay within a good distance of the drone regardless. Even if you press the button, the drone won’t return to you if the battery is depleted.

A third feature that’s perfect for any skill level is the 360 flip. The X708W will perform a flip along the axis of its propellers. It’s sure to give you some interesting footage if you’re watching the flip occur on your smartphone.

While making the case for an ideal beginner’s drone, they’re a couple things to make note of. The camera on this drone is 720p, which is definitely not the best you can have on a drone. Furthermore, it’s built into the drone, meaning you can’t swap it out for a better one.

Battery life ranges between 7-9 minutes, which isn’t bad, but it’s not ideal either. This length of battery usually means that you shouldn’t let the drone out of your sight. There are more beginners drones that have longer flight times, but probably not as many that are as maneuverable as the X708W.

In all, the gripes we have about the X708W are relatively minor compared to its features. The X708 sits right in between simple and intermediate level of difficulty for drones.